Today is day three of Governor Terry McAuliffe’s budget impasse and the hypocrisy is on full display.

The Governor and his allies in the State Senate are holding the budget hostage, refusing to pass a budget unless Virginia expands Obamacare. In other words, they’re willing to shut down state government in order to get what they want.

If you think this is political spin, click here… and here… and here. Proponents of Medicaid expansion are readily admitting they’re using the budget as leverage and do not intend to back down.

The great irony is that last year, then candidate McAuliffe decried Republicans in Washington for doing the exact same thing.

Ahead of the federal government shutdown, McAuliffe even sent a letter to the Virginia congressional delegation urging them  “to stop using the threat of a government shutdown as a bargaining chip in other negotiations, including over the health care law.” 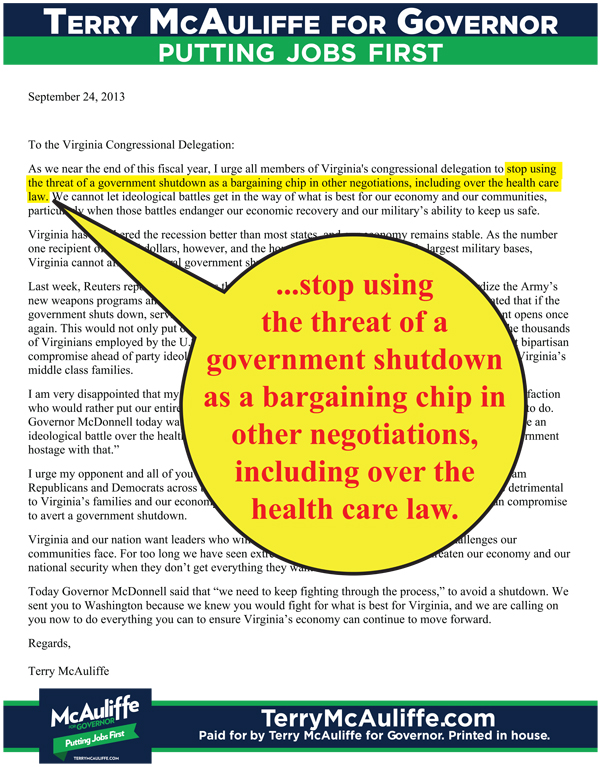 Virginia’s budget and AAA bond rating are not bargaining chips. Holding hostage funding for Virginia teachers, firefighters, police officers and state employees is wrong, regardless of how you feel about Obamacare.

House Republicans have offered the responsible path forward – Virginia should pass a budget and then consider the issue of Obamacare’s Medicaid expansion separately in a special session.