Ten days from now and over two weeks after the state budget was originally due, the General Assembly will return to Richmond for the special session called by the Governor.

In calling the special session for March 24, Governor McAuliffe said he wanted time for legislators to go home and hear from their constituents.

But after six days, it’s clear that what he really wanted was more time on the campaign trail.

Since the General Assembly adjourned last week the Governor has been touring hospitals across the Commonwealth, joining CEOs and other executives at long conference tables in big board rooms. 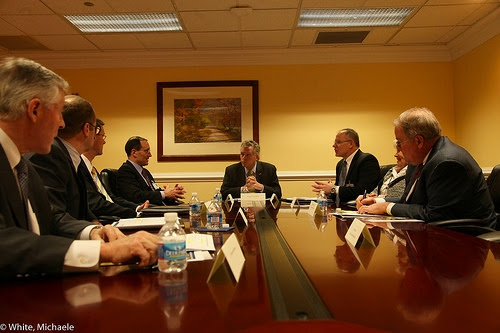 Each day the Governor spends on the campaign trail meeting with hospital executives is another day Virginia goes without a budget.

That’s another day of uncertainty for Virginia teachers, who are waiting on contracts to be issued for the fall.

That’s another day of uncertainty for Virginia students, who are waiting to see how much they’ll pay in tuition next year.

That’s another day of uncertainty for local government leaders, who are waiting to see how much they can count on from the Commonwealth as they set their budgets.

Last night, Richmond and Northumberland Counties joined the cities of Virginia Beach, Chesapeake, Colonial Heights and Loudoun, Hanover, New Kent, Prince George and Shenandoah Counties in calling on the Governor to separate the issue of ObamaCare’s Medicaid expansion and let Virginia pass a budget as quickly as possible.

All of those letters and resolutions will be waiting on the Governor as he arrives back in Richmond, whenever that may be.