The promise of “free federal money” has been the biggest selling point for Governor McAuliffe and proponents of Obamacare’s Medicaid expansion.

The Obama administration explored cuts to Medicaid in 2011 as part of deficit reduction talks, and according to recent congressional testimony from former Secretary of Health and Human Services Kathleen Sebelius, the administration is now looking at cuts to Medicaid payments for states who have Medicaid backlogs caused by HealthCare.gov. 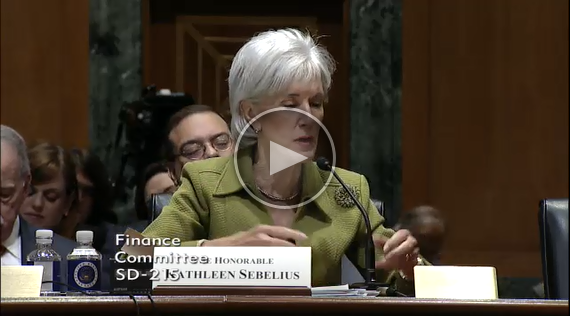 “We are actually kind of ramping up the pressure on states and will look at potentially some administrative reductions in payment if people don’t pick up this pace because having a backlog that is not being processed in a timely fashion is just keeping way too many people from the healthcare that they are entitled to.”

Virginia is reportedly dealing with a 42,000 case backlog due to technical problems associated with the state and federal systems.

While these cuts may never actually come, the fact that they are even on the table is another example of why we can’t trust the promise of free federal money from Washington D.C. Free federal money always comes with strings attached and Virginia has little control once we sign on the dotted line for Medicaid expansion.

Governor McAuliffe recognizes the people of Virginia won’t buy this sales pitch, so he has taken the entire state budget hostage in order to force the state to implement Medicaid expansion. That action is causing tremendous uncertainty for local governments, school boards, colleges and universities and Virginia’s business community.

Governor McAulffe should drop his demands for Obamacare, compromise and let the General Assembly pass a clean budget that keeps government open.